Geoffrey Publications is delighted to announce the imminent availability of a new book, ‘Triumph and Tragedy: The Alan Hinton Story’, by Alan Hinton (with Charlie Bamforth). 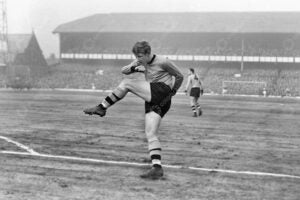 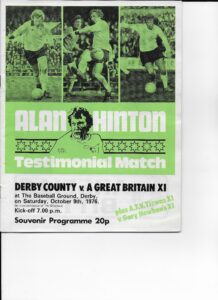 Few indeed are the people who can claim to have been intimately involved in professional football for more than 60 years. Fewer still are those who can justly say that they reached the very top as a player, a coach and as an ambassador for the game. And surely nobody else can say that they did this whilst somehow trying to come to terms with the tragic death of a child.

Soccer has been the lifeblood of Alan Hinton since he was a young Wednesbury lad watching Wolverhampton Wanderers and West Bromwich Albion, imploring visiting supporters to send him their clubs’ programmes. He left school at not-quite-15 years old to join the ground staff at Wolves. He was, literally, taken under the wing of the legendary Jimmy Mullen and transformed into a dynamic, completely two-footed left winger with a dynamic shot who was top scorer in Stanley Cullis’ young Wanderers team of the early sixties. The youngster never got too big for his boots – and this book gives endless stories of his down-to-earth nature. For example, how many modern players would be making their way to and from work on two buses and going home to share a bed with his brother after making his England debut, aged 19?

Wolves fans were devastated when their ‘Noddy’ was let go to Nottingham Forest in 1964, though not so heartbroken as Hinton himself. Yet he picked himself up, dusted himself down and soon proved the wisdom of Johnny Carey in bringing the blond bomber to the City Ground. To this day there is many a Wolves supporter who considers this the worst bit of business Stan Cullis ever did. Alan Hinton is the first to admit that he was never the greatest defender and there were those amongst the Forest faithful who did not appreciate that. However, the folks that matter recognized Alan for what he did best, and those included Alf Ramsey. It remains a regret for Hinton to this day that the legendary England manager decided to phase wingers out. “Remember, he’d been a full-back”, smiles Alan Hinton.

And so to perhaps to the wide man’s greatest period, on the left wing of the Brian Clough and Peter Taylor Derby County side. All set pieces and penalties fell to Hinton, which meant more television exposure than anyone else and a £1,000 contract to wear those white boots. To some on the Baseball Ground terraces he became “Gladys”, but to colleagues and opponents he was recognized as someone repeatedly described as the best two-footed crosser of a ball of all time. Alan Hinton was a mainstay of two championship sides at Derby, the second under the formidable Dave Mackay.

And then the devastation of the death of Alan and Joy’s 9-year-old son. For a while Alan’s life fell apart, but then Bobby Moore told Al Miller, the Dallas Tornado Coach, that Alan Hinton still had petrol in the tank, and he should go get him. And so to a resurrected career in North American soccer, first with Dallas and then as part of a dynamic Vancouver Whitecaps team, where he went as assistant coach to Tony Waiters but where he soon insisted that he still had mileage as a player and duly set the record that still stands for assists.

Then to a highly successful career as a coach in his own right and numerous accolades from his time at the helm of Tulsa Roughnecks, Seattle Sounders, Vancouver Whitecaps, Tacoma Stars and in youth soccer in Seattle. He remains Mr. Soccer in Washington State and for many years has been a hugely popular media figure and tremendous ambassador. 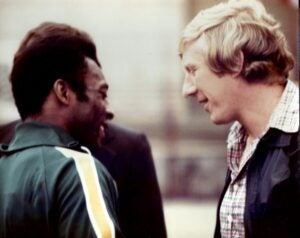 The book delves deep using Alan Hinton’s own words, but also features the thoughts of an extensive range of his colleagues through the years, legends such as Ted Farmer and Terry Wharton at Wolves, John Barnwell and Terry Hennessey at Forest, Roy McFarland and John O’Hare at Derby, Tony Waiters and Alan Hudson from his time in North America. And many, many more.

The book is scheduled for publication in April 2021. We are offering you an opportunity to subscribe to the book and if you do this, your name will appear at the back of the book. This can be done either in your name or in memory of a lost relative/ or friend. If you wish to purchase the book and have your name in the book, you can send payment and contact details to the author’s publishers as below.

To pre-order your copy of ‘Triumph and Tragedy’, please fill in the order form printed below. A certificate will be given for every advance purchase. Make this a wonderful gift for someone by buying the book for them. They will be able to exchange their certificate for the book when it is published.

There is no gallery selected or the gallery was deleted.

Department of Food Science and Technology